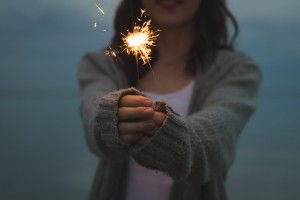 Some days, she is just a pretty girl – the natural kind. Hair pulled into a messy knot at the nape of the neck, dark circles emanating from years of giving on empty, no make-up on – no one to impress. Just a pair of black yoga pants, a cotton t-shirt and the kind of eyes that captivate and soothe even the brittlest of hearts. Tonight, though, she pauses in front of the mirror, lifts the soft edge of the lavender tee that gently presses against her abdomen and stares into her reflection.

A familiar insecurity flickers: this cardboard shell of the girl she used to be can never be the better option.

Catherine at 11:30 PM on that Wednesday evening.

A photograph of the woman I am today captures 11:30 PM on a typical Wednesday night. I am drenched – 50% sweat from moving heavy boxes all day and 50% rain water from the torrential downpour that began shortly after we started moving. I am sitting cross-legged on a SpaceX VP’s (“SpaceX”) marble countertop in the kitchen of his nearly empty Georgetown estate. After months of working evenings and weekends, his West Coast move is almost complete.

With less than twelve hours remaining on the clock, just one antique table stands between this urban sanctuary and its new owners – an ambassador and his no-nonsense wife. After exhausting all my transport and storage options, I resign myself to the bottle of champagne SpaceX saved for a rainy day and offer up a plea to the Universe as I stare into the storm. Someway, somehow – I will move this table.

As an executive assistant (“EA”), I manage high-profile lives from the shotgun seat. Like life, Life Management has its less glamorous moments. That night, there were no high-fives for scoring SpaceX’s EA position. When I called five minutes before closing, the manager of the storage facility did not care that I was a trilingual, honors graduate from a prestigious university who once served as an assistant to the Chairman of the Appropriations Committee. In fact, it was simply my ability to put myself in his shoes that eventually moved that table out the door. Even still, after fifteen years of assisting high-profile executives, I find myself favoring the adventure of the unexpected setback. 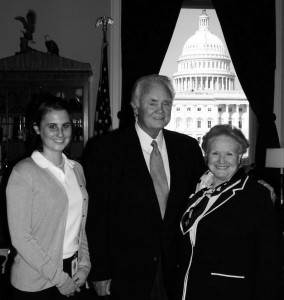 Unlike other professions, high-level executive assistance is not showcased by an ability to stand out in a crowd, but rather by the aptitude to blend seamlessly into one and subtly lead it. Armed with planners in lieu of capes, these bright-eyed and tight-lipped MVPs ensure that the public-facing world sees a tireless sidekick always standing alongside the heroic VIP, and that the VIP entrusts the sidekick to actually be the champion.

How does the MVP command leadership without VIP prestige?

Like yoga, flexibility is both the key to success in this career path, and the reward. The most successful assistants know how to face adversity, overcome it and convert the experience into something valuable – emotional intelligence (“EQ”). It is this EQ that enables these EAs to shift their perspective, put the shoe on the other foot, and prioritize the human element vital to a successful life.

For me, cultivating EQ began with a six letter word: cancer.

There is nothing like hearing the word cancer. Be it a small lump at the tip of your nose or the force that takes your last breath, cancer incites a fear so primal that it radiates in your bones. 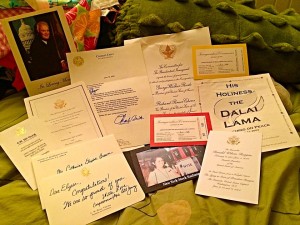 Memorabilia Catherine collected throughout her career.

As I sat in Dr. P’s office on an early autumn day in 2005, an insurmountable fear of the unknown consumed me. I do not remember much from that day beyond Dr. P’s deep belly sigh and the way his mouth moved as he promised I would be ok. A blurred moment passed, though it felt like an eternity. Adrenaline poured into my bloodstream and an eerie silence fell between my ears as I picked up his trash can and puked out the vivacious girl I once knew.

Within the week, my petite-framed skeleton crumpled down atop a bed of crisp, white paper. Sweat glistened down my forehead, hesitating briefly mid-cheekbone to fuse with my tears before continuing its descent down the contours of my face. Unaffected hospital lights glared down as the hot mixture of secretions smeared waterproof mascara into a gray puddle beneath my nose.

Poof – childhood was over.

Memorabilia Catherine collected as a survivor.

A foggy haze rolled over my eyes as the gurney rounded the corner of the hospital room door and rolled toward OR1. The makeshift bed slipped through the swinging doors with ease, but stopped abruptly in the center of the room. The OR nurse flashed me an ironically unpleasant smile as a warm sensation crawled up my arm and dove into my chest cavity. Vision blurred. His face emerged, and the last image I recall is that of Dr. P’s lips lowering to my forehead as the drugs lulled me into an induced sleep.

Five hours later, I awoke to the faint beeping of a heart rate monitor. Just as the repetition began to soothe my tattered nerves, the hospital room door swung open, jolting me awake and revealing his short, pudgy outline. I blinked my eyes to adjust focus and the image of Dr. P appeared more clearly.

He flipped through a chart, lowered the clipboard alongside his torso, and paused; I almost lost you in there. My heart skipped two beats. A rational person tried to ease a panicky mind, but my nerves refused to concede. Tears began to fall involuntarily. I closed my eyes. Until yesterday, I had so many plans; but that day in that hospital bed, I knew that nothing would ever be the same. However, at a mere twenty years old, I did not know how to die, I barely knew how to live; so, for years, I tortured myself with the what-if’s and the why-me’s and shrouded myself in insecurity.

The girl before the woman was physically whole but mentally half. Vivacious – yes, but if I am honest – that confidence was not entirely genuine. So, when adversity struck at the precipice of adulthood – I thought that I had no toolkit, no actionable plan and no guarantees; but the only thing I did not have was perspective.

In yoga, we exercise flexibility so that when we meet with life’s limitations (like the fear of the unknown) we are prepared to evaluate the situation from a curious point-of-view. This pause creates the space for us to choose our own reactions – consciously and conscientiously. The practice, itself, showcases life’s one constant: just outside of your perspective lies another choice. That day, in that hospital bed, I had a choice: define myself as a victim of the unknown or as its champion. 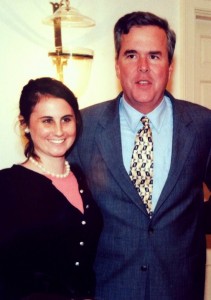 As an A-type multitasker, learning the lesson of being present did not happen overnight. If you had asked me three years ago where I would be today – I would have said married with a kid. Seven years ago, I would have been living in France by age thirty. Ten years ago – I would be working for NASA at this very moment.

My truth is: it took twenty one scars for me to become my better option. Now, as a newly minted thirty-one-year-old woman, I choose to master what I can control – the present. That is not to say that I do not plan for my future. I absolutely do, but with every dream that soars out the window and expectation that shatters at my feet, I gain the insight that propels me more confidently into the unknown.

So, what is everything I know?

As I stand at the edge of Silicon Valley and elevate other amazing executive assistants toward success, I know that a powerful woman rose from the ashes of that vivacious girl. I know that when you are confident in why you do something, how you do it is elastic enough to explore and endure many perspectives beyond your own. Lastly, I have proven to myself that even cardboard has substance, and although sometimes subject to the fancies of the wind – that is part of its purpose: to help you bend with them.

Next time you find yourself limited by your own hand, remember that the universe does not use a day planner. Even masters of organizational science must get comfortable with the unknown. We become champions by practicing flexibility, so when faced with a challenge, we can bridge the gap between the expected and the unexpected with purposeful ease and choose to lead the way with a smile.

See P40: Professionals Under 40 Full Article: Chronicles of an EM.V.P: An EM’s most valuable playbook

About us
Advisory Board
Blog

We're not around right now. But you can send us an email and we'll get back to you, asap.